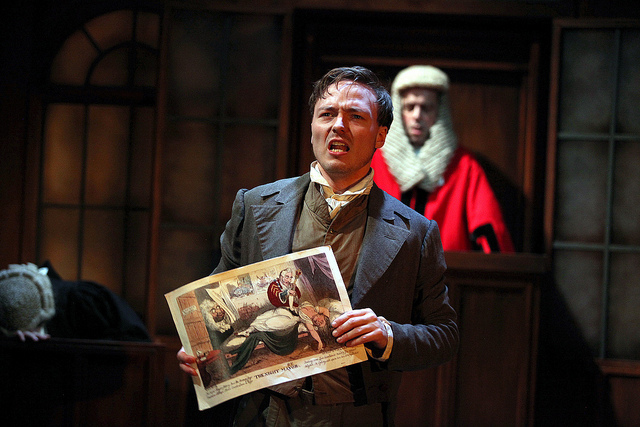 Trial by Laughter at the Lowry Theatre Review

In 1871 William Hone’s satirical pamphlets were the Private Eye of the Regency era.

Along with cartoonist George Cruikshank, Hone poked fun at the licentious behaviour of the Prince Regent, Prince of Wales, whose rotund figure he comically portrayed as Prince of Whales. The corrupt Regency Government and justice system was also ripe for ridicule. But under the jokes lay barbed criticism of the authorities and a championing for civil liberties such as universal suffrage and the reform of lunatic asylums.

Their message of social reform was often presented in terms the masses were familiar with and would understand. This included parodying the Lord’s Prayer and Ten Commandments, changing the words to mock the monarchy and state. The problem was, those at the other end of the joke didn’t find it so amusing and Hone found himself in the dock charged with criminal and blasphemous libel.

Two hundred years on, this unsung hero of free speech has been rediscovered by two of the most popular journalistic minds behind satirical news magazine Private Eye, editor Ian Hislop and cartoonist Nick Newman, who have brought Hone’s story to life in a timely manner that makes us question the attacks on free speech still seen in many parts of the world today.

The writers waste no time in getting us straight to the courtroom drama, where William Hone (Joseph Prowen) presents his own defence, attempting to win his case with clever humour rather than legal prowess.

Both prosecution and defence present their case to the audience, as if facing a jury. Speakers placed around the auditorium boom out responses, which sometimes works, but at other times feels like canned laughter, covering the audience’s silence.

The difficulty for its dramatisation is it falls between two popular genres – comedy and courtroom drama. Unfortunately, it can’t do both, and as such can leave audiences on either side disappointed. Neither funny enough to be billed a comedy or tense enough to be a courtroom thriller.

Hone and Cruikshank (a cock-sure Peter Losasso) are presented as cheeky young men, genuinely unaware that their comical observations could be viewed by some as blasphemous or inciting revolution. We get a small glimpse of Hone’s family life and the pair’s tavern drinking banter. But there is little character development to make us emotionally buy into the historical high stakes.

The Prince Regent and government ministers behind the prosecutions are portrayed as the ‘bum shank’ comedy caricatures Cruikshank draws them. And we are never completely lost in their 19th century world with regular quips such as the Prince, impersonating our current Prince of Wales’ insisting: ‘No prince should have to endure such ignominy again.’

We all know how that turned out for the UK monarchy. But when journalists are being silenced by authoritarian regimes and gagging orders, or their work labelled ‘fake news’ for being disagreeable to those holding political power, the treatment of this little known historical figure sounds a warning. We do well to remember free speech pioneers like William Hone because as the play reminds us, it’s easy to forget what freedoms we take for granted once cost to attain.

As a political satire, Trial by Laughter is a cutting piece, intelligently written. But in attending closely to historical detail while shoe-horning 21st century references, unfortunately it loses the emotion and tension needed for a gripping drama.

Trial by Laughter is at The Lowry, Salford Quays from 29 January to 2 February 2019.

Read our interview with writers Nick Newman and Ian Hislop.