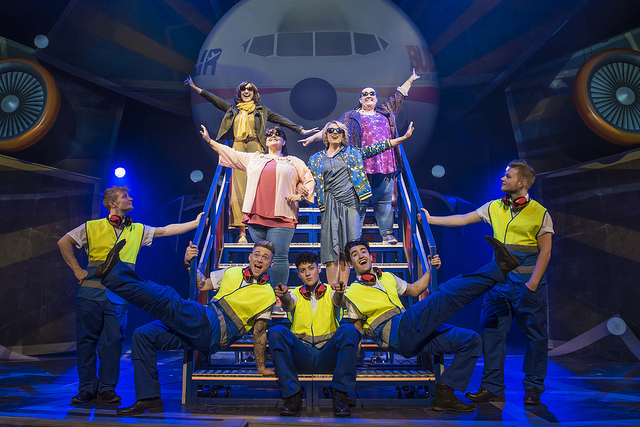 Take That’s The Band Musical at The Lowry Theatre, Review

After 17 months on the road The Band Musical, winds its way back to the north west where it premiered with all the pizzazz of showbiz royalty at Manchester Opera House.

At the curtain call, Take That’s Gary Barlow, Howard Donald and Mark Owen, the producers of the show, performed live on stage with Lulu, singing Relight My Fire. You can imagine the audience reaction – it was electric, and everyone left on an excited high.

On a cold, dark January night in Salford, it’s natural to question if it would feel as good second time around, with simply the cast and the BBC Let It Shine’s talent winners to sing Take That’s hits? The answer – a resounding yes. While I loved the show first time around, on a second viewing it’s even better.

The cast, far from being road weary, still bounce with energy. The band – AJ Bentley, Curtis T Johns, Nick Carsberg, Yazdan Qafouri and Harry Fabulous Brown – have grown into their roles and appear more confident to hold the stage as pop-icons. And, no, I’ve not just fallen into a boyband daydream, tempting as that may be – he really is called Fabulous.

There are some spectacularly staged concert scenes and the fun opening scene, where the boys pop-up from the furniture of a fan’s bedroom feels much slicker.

Two of the young female cast, Lauren Jacobs as Zoe and Rachelle Diedericks as Debbie, also make impressive professional debuts in the show and have grown into their roles in a way that makes the friendships celebrated feel more genuine.

It is a jukebox musical in so far as all the songs are well-known Take That hits, but here the music forms more of a soundtrack to the action, rather than being manipulated into Tim Firth’s humorous and relatable story.

At its heart, it is the band of friendship and not the pop band that dominates the narrative. There is something for everyone here. If you’re young you can relate to the young teens crazy about their first crushes on a boy band, and the band itself is a treat. If you lived through the early 1990s, when the show opens, it’s a huge nostalgia trip. Not only does the music take you back, the technology, or lack of it, does too. In this pre-digital age, the girls miss a train and can’t pay for a bus because they’ve spent all their cash on buying candy dummies to suck on. There are no selfies or Facebook updates, their joint memories are all they have to remember their first gig.

Fast forward 25 years and where are the girls now? Like a comeback tour, the friends reunite as they try once again to fulfil their dream of meeting the boys. Rachel Lumberg, Alison Fitzjohn, Emily Joyce and Jayne McKenna as the 40-something fans, take us on a roller-coaster of emotions that has us crying one minute and laughing the next.

Mixing the excitement of a pop concert with the warmth of big hug from your best friend, it is an uplifting, feel-good winner.

The Band Musical is at The Lowry, Salford Quays from 16-26 January 2019. See website for full tour details.