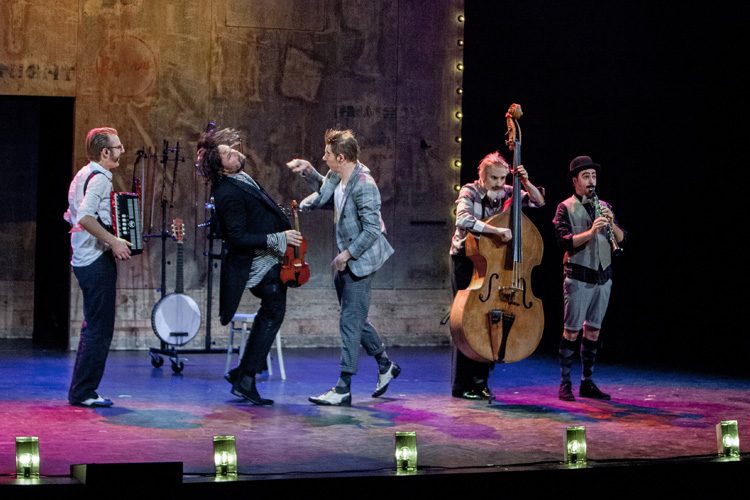 It’s a rare show that mesmerises adults and children alike. And Dutch comedy troupe, Släpstick go one further, by breaking down language barriers too.

Winners of the 2017 Edinburgh Spirit of the Fringe Award, Släpstick is an inventive mix of music and physical comedy that feels both nostalgic and new.

The nostalgia comes from its quirky vaudeville feel and clear homage to slapstick greats such as Charlie Chaplin, Marx Brothers, Harold Lloyd and Laurel and Hardy (who appear on film projection during one of the sketches). Like the silent-film era their comedy comes more from their physicality than from what they say. Their very look is comical, wearing ill-fitting clothes, and sporting unruly hair and heavily painted eye-brows.

The new comes from interactive use of multi-media to create on-stage interaction with film projections; the incredible range of instruments played, and the mix of languages spoken to turn familiar tunes into comedy gold. Who would have thought hearing, Raindrops Keep Falling on My Head sung in German could be so funny? For the younger audience members, Uptown Funk gets a German remix too, before one of the singers is spectacularly bashed on the head, cartoon-style by an enormous hammer.

The show opens with a fairground sketch, a theme picked up at various times during the show. As well as the crazy stage antics it allows for plenty of audience participation with what must be the longest hook-a-duck stick in the world. And just because you’ve picked a seat in the middle of an aisle, that’s no escape as the cast run along the rows to pick out people in the centre seats.

It’s all in good humour, and the youngsters especially are itching to get involved as balls fly up to the circle, a massive popcorn box is passed round to share, and a huge pillow-fight breaks out in the stalls.

The playful energy makes for complete escapism and a joyous antidote to the rush outside. It’s silly and fun, but also extremely clever. Between them the five performers have mastered more than 100 instruments. There are too many different instruments to count on stage. Some, like the body-wrapping sousaphone are unusual and others so unique, such as a hybrid violin and horn, they could have been created by the musicians just for this show.

There are instruments stuck together, so during a slapstick sketch the slide of a trombone is pulled off and used as a violin bow, and other has a flute stuck to it. Banjos are reversed to reveal mandolins, and one musician plays what can only be described as a musical egg.

The boundless energy of the cast is enviable. They are interacting with the crowd before the show starts, don’t fully leave the stage during the interval, and come to the front of house for selfies after the show.

Sitting with my six-year-old theatre buddy we clap, laugh and dance all the way through. ‘Bravo!’ he shouts to the stage, copying one of the comics. Bravo indeed.

Släpstick is at Home, Manchester from 13-22 December 2018. See website for full tour details.