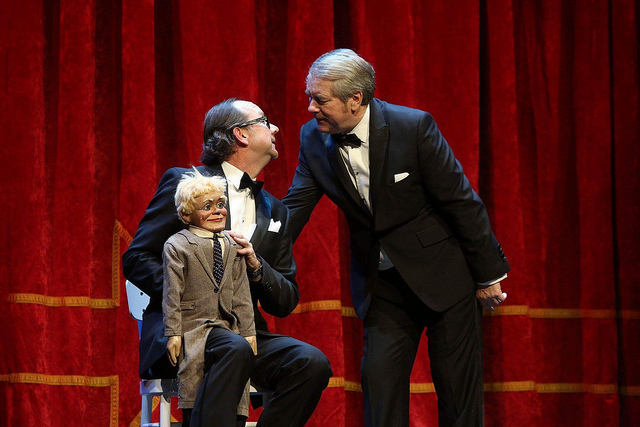 An Evening of Eric & Ern at The Lowry, Theatre Review

There was a time when Eric Morecambe and Ernie Wise were as much a part of Christmas as tinsel and turkey.

In an age before Netflix their Christmas specials drew in audiences of 28m. And on their move to ITV the comedy duo even had their own TV jingle: ‘Here they are now, Morecambe and Wise‘

More than 30 years on, TV has changed but the love people have for Morecambe and Wise clearly hasn’t. A blanket of warm nostalgia covers the audience when Jonty Stephens and Ian Ashpitel take to the stage as what is still considered to be Britain’s greatest comedy double act of all time.

The pair look like their idols, they have the voices and mannerisms we all recognise, but can they make us laugh like Morecambe and Wise did? Even with the material at hand these are big shoes to fill.

While it’s clear the original duo had built-up the anticipation for the show, it is Jonty and Ian’s carefully observed sketches and affection for their comedy heroes that runs with this energy and keeps it high.

As well as their comedy, Morecambe and Wise were known for their enduring friendship, that made for a remarkable stage chemistry. Jonty and Ian, pals from drama school days, also have a warm stage chemistry that radiates respect for each other as well as the act to which they are paying homage.

The show recreates what it might have been like to see Morecambe and Wise live on stage. There is the famous red curtain, a piano, a Christmas tree and an old-school telephone that carries on ringing when it’s been picked up. Perhaps if the famous duo were to take their show on the road now, we’d get sets creating the famous TV bed or kitchen sketches. But this minimal setting feels truer to the time.

There are a couple of moments when in our politically correct era I feel myself tense as to what might be coming next, only to relax on realising there is nothing remotely offensive about any of this material. It’s filled with practical jokes, like the paper-bag trick and innocent humour such as: ‘Don’t have the fisherman’s pie.’

‘He gets very upset.’

What makes the comedy so timeless is that it doesn’t have political references. And where there are references to well-known names of the time, such as Angela Rippon, Des O’Connor and Marjorie Proops, it sends a wave of nostalgia over the audience who knew them and doesn’t lose much for those too young to remember.

There are a couple of the duo’s famous sketches, such as the ice-cream van and Grieg’s concerto, where the audience is finishing the gag with them. But from the rapturous reception it’s clear knowing the punchline doesn’t spoil any of the enjoyment.

In singer, Rebecca Neale the show has its own special musical guest, a once staple part of the Morecambe and Wise show. Rebecca has a terrific voice as well as providing a brilliant foil to the comedy capers behind her. And it is the music which leaves us on a high. The audience can’t resist singing along to Bring Me Sunshine and inviting them to join in is like sprinkling happy potion from above.

By the end I feel like I am watching Morecambe and Wise again and it’s a mix of emotions. Younger people in the audience, who never knew the original act, are laughing and singing along too. It’s the kind of feeling you want to wrap up and keep, and for lifting spirits at Christmas, it’s a gift of a show.

Read our interview with Jonty Stephens who plays Eric Morecambe.