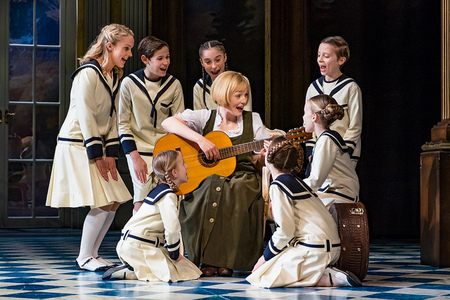 The Sound of Music

What a year it has been for Lucy O’Byrne. After becoming the first classical singer to get to the final of BBC1’s The Voice, she’s now back in Salford in one of the most iconic musical roles for the Lowry’s Christmas show, The Sound of Music. And what a perfect Maria she is too.

It is a role made famous by Julie Andrews in the film, which celebrates its 50th anniversary this year. It is the most successful movie musical of all time. Fewer people may know that The Sound of Music is also a true story, based on Maria Von Trapp’s 1949 autobiography of her singing family who are forced to flee Austria during the Nazi occupation in World War II. It is a wonderful, well-known story that audiences never tire of, but its enduring popularity also means that expectations of any stage production are high.

This new production from Bill Kenwright is a winner, in no small part down to his casting of O’Byrne. Entering the stage singing The Sound of Music she wins the audience from the off – the clarity of her voice is captivating and her natural enthusiasm radiates the warmth and sweet innocence necessary for the part that can’t fail to put a smile on your face.

The audience was itching to sing-a-long, as they did when the band struck-up after the interval. But as soon as the curtain lifted there was silence, no-one wanted to interrupt O’Byrne’s heavenly voice.

However, this is by no means a one-woman show. O’Byrne is strongly supported by a fine cast. Jan Hartley gives Mother Abbess just the right mix of sternness and heart, and wows the audience with the strength of her voice, singing Climb Ev’ry Mountain. Gray O’Brien (Coronation Street’s Tony Gordon) as Captain Von Trapp doesn’t have a classically trained voice, but we can forgive that. Christopher Plummer who played the part in the film was dubbed over, but here the rawness of O’Brien’s voice adds a vulnerability and humanity to his tough naval captain character. We get that he loves singing and he has a good voice, but next to Maria and her convent friends, well we can see why he falls head over heels.

The children are wonderful. Many of them only look to be the age of the characters they are playing, yet they never once step out of role and are all true professionals. Considering that they are on stage for most of the show, this is no small feat.

I must also mention Gary McCann’s set design because the stained glass of the convent and the majestic staircase in the family home both led to audible ‘wows’ from the audience.

It is a heart-warming family show. And if I was to list my favourite things this Christmas, The Sound of Music at The Lowry would be one of them.