We are giving away a pair of tickets to see Berlin’s Max Raabe & Palast Orchester at the Bridgewater Hall, Manchester on Friday 6 March 2020.

The internationally acclaimed singer and musicians promise to take audiences back in time on a musical journey of romance and sophistication, revisiting the ‘Roaring Twenties’ a century on from what was an exciting new era for music, dance, style, and fashion.

Now it’s the turn of the UK to experience the warmth, charm and elegance of Max Raabe & Palast Orchester first-hand with tour dates in Eastbourne, London, Birmingham, and Manchester which form part of a wider international tour.

Formed in the 1980s, the then group of college friends have since grown into a hugely successful 13-piece ensemble – becoming one of Germany’s biggest selling acts, winning praise, rave reviews, and a legion of fans across the globe.

Max Raabe & Palast Orchester are well-respected in Germany, having dominated the music charts for many years while staying true to their unique style and genre.

They recently released a new MTV Unplugged album which went straight into the Top 10 in the German pop charts – reaching Number 2 in early January 2020, alongside Robbie Williams, Coldplay and Leonard Cohen with places at the top of the charts.

Stylish 57-year-old Max Raabe is famous for performing while impeccably dressed in white tie and tails, and is joined by 12 musical maestros from the Palast Orchester.

Dashing, dapper and debonair, Max believes the timeless melodies and songs of the 1920s and 1930s have an inherent magic. He combines nostalgic flair with pop-star appeal, along with a good dose of self-irony and dry comedy.

The tour is timely given the nation’s fascination with all things vintage, including Downtown Abbey, Gosford Park and Brideshead Revisited.

Together, Max and the orchestra present the most stunning classic and timeless repertoire in their original arrangements. With a distinctive sound, audiences will be captivated by Max Raabe & Palast Orchester as they are transported to yesteryear to experience high style and musical glory in the most sumptuous way – making this show one of a kind, and the hottest ticket in town.

Max Raabe was born 1962 in Lünen and has always sung – from the youth choir to even on his bicycle. He moved to Berlin in his early twenties to study opera. He financed his studies with small performances, and in 1986 he founded the Palast Orchester with a number of fellow students. They are now the worldwide leading band of music from the era of the Weimar Republic.

Max has received numerous awards for his commitment to remembering the music of the 1920s and 1930s, including the ECHO Classic in 2000 for his interpretation of Mack The Knife; Paul-Lincke-Ring Of The City Of Goslar in 2005; the cultural prize of his hometown Lünen in 2007; and the Order Of Merit Of The State Of Berlin in 2012.

Their appeal is diverse and far reaching. Max Raabe and the Palast Orchester performed at the star-studded wedding of singer Marilyn Manson and model Dita Von Teese at a castle in Ireland in 2005.

The show will feature diverse range of music and songs including the hilarious Rosa, Reizende Rosa (Rosa, Ravishing Rosa); romantic tune Tonight Or Never; the classic Kurt Weill’s Mack The Knife; alongside standards including I Won’t Dance, Night And Day, and Sweet Sue.

These first UK tour dates will give music fans the opportunity to experience the sights, sounds and atmosphere of this very special show and era before Max and the musicians continue on a worldwide international tour visiting Austria, Canada, Germany, Italy, Luxembourg, Switzerland, and the United States Of America – including the iconic Carnegie Hall in New York this April.

For a chance to win simply email your name and address to competitions@quayslife.com with Max Rabbe in the subject line before 5pm on Thursday 27 February 2020.

The winner was Gillian Hitchen.

Read our interview with Max Raabe.

Abel Selaocoe and Adam Szabo on their latest collaboration The Oracle 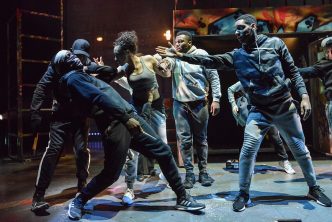