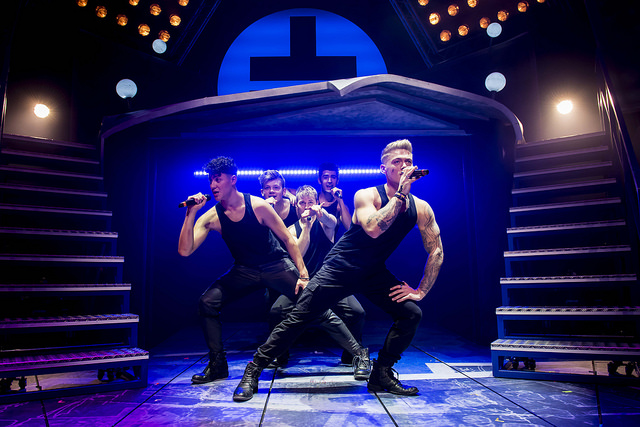 On tour for almost a year and such a hit that more dates – including a West End run – have been added, Vicky Edwards catches up with Yazdan Qafouri and Curtis T Johns to learn more about starring in Take That’s musical The Band

Cast through the national TV talent show Let it Shine, during which Gary Barlow scoured the country to find a young boy band to play members of the ‘band’ of the title, Curtis, Yazdan, AJ, Nick and Sario found themselves catapulted into the limelight and being mentored by one of the most successful boy bands of all time.

“Two-hundred-and-eighty shows later we’re still alive and it’s been a whirlwind!” laughs Curtis, admitting that being in a full-scale musical has been eye-opening. “The biggest challenge for me has been the intense choreography and having to sing and dance at the same time, but it has been amazing.”

“Wonderful,” agrees Yazdan (Yaz). “I love musicals, but especially this musical! It’s so real and natural. Every song is integrated into the action, so it is seamless. It always works.”

The Band is directed by Kim Gavin and Jack Ryder and sees Take That songs cleverly woven into a story by Tim Firth, who also co-wrote The Calendar Girls musical with Gary Barlow. It follows the lives of five 16-year-old friends for whom in 1992 ‘the band’ is everything; 25 years on the women set out once again to fulfil their dream of meeting their heroes.

“Some people say that they don’t like musicals, but this is different. If you have any reservations or preconceptions, throw them away and just come! You will leave feeling amazing, I promise,” says Yaz.

“And,” Curtis is keen to interject, “while many things in the world right now don’t focus on simplicity like friendship, anxieties and human interactions, our show really does. Weight issues, sexuality, anxiety – it’s all there – and Tim Firth makes it so relatable. So many people come and tell us that they relate to the characters and the story. It gives people a sense of identification as well as making them laugh.

“That’s Tim’s genius. He takes a big subject and makes it real and warm. Everything in this show is balanced by honesty and humour and that gives it integrity: especially to Northern audiences. It has that down to earth sense. I can say that because I’m a Northerner!”

When it comes to the cast, the boys are happy to be outnumbered by girl power. Five younger actresses play the teenagers of the piece, with their older selves played by established and hugely experienced actresses.

“Working with these women is an experience that has just been a joyous learning curve,” says Yaz. “Watching them, speaking to them – they helped me so much. They are so amazing at what they do and every performance they inspire me to push myself. I feel so honoured.”

Curtis adds: “They are strong individuals and they are so good at what they do. It’s a pleasure to work with people you feel so comfortable with and can learn from.”

The value of lifelong friendship is a theme that runs through the heart of the story and I’m curious to know what the boys think about the narrative and its effects. Yaz pauses to consider how best to express himself.

“Our musical showcases these normal women and their friendship,” he says slowly. “It’s a rare but wonderful story. Older women are so under-represented in theatre and so to be part of something that makes a difference is special. It’s an empowering show for women because all the female characters are so diverse and yet so relatable.”

Asking the boys what their personal highlights of the tour to date are, elicits a united response: opening night in Manchester, the culmination of months of work, and having family in the audience.

“My mum always explodes with pride! I love strong women and my mum is the strongest, most beautiful and most amazing woman I will ever know. She is my rock. It’s all about family for me; Mum, Dad and younger brother – they have nurtured me since day one,” says Yaz, who at the age of four came to the UK with his parents as asylum seekers.

“And the times when Take That come and perform with us are pretty amazing,” laughs Curtis. “We literally have the best front row ticket being on stage with them. I am such a fan. Our choreographer would shoot me, but when Take That are on stage with us I forget to watch what my feet are doing because I am too busy staring at them!”

So, what do they miss when they are touring?

“My friends and family; that sense of normality,” says Curtis. “This job gives you a very elevated position; people want autographs and selfies a stage door and while that is lovely, it is very peculiar to me and difficult to process.”

Yaz nods his agreement but confesses that home cooking is also an absence he feels keenly. “I’ve never lived away from home before so I miss my mum or dad cooking me something after the show,” he sighs, as I warn him that putting this in print may result in a stampede of fans to stage doors bearing culinary treats.

Great company, insanely talented and utterly gorgeous, the boys are also sweet, kind and funny, making them utterly irresistible. Add in a Take That soundtrack, a cracking story and brilliant acting and you’ve got a show that is the equivalent of musical gold. And what do we do with gold? Yep, we let it shine…

The Band is at The Lowry, Salford Quays from 16-26 January 2019. See website for full tour details.

Read our review of the show when it premiered at The Opera House, Manchester in 2017.

Written by Carmel Thomason
Add comment
Mark Watson gets up close and personal with fans in new tour The Infinite Show
FacebookTwitterPinterestWhatsApp
Ian Hislop and Nick Newman on their new play, Trial By Laughter